The Rock Seven RockBLOCK+ is seeing continued use in the Slide Sentinel project from Oregon State University. The project is currently under rapid development as the team prepare for a deployment very soon on an active landslide in the Pacific Northwest. Current development is focussed on programming the rover and base station units.
What is Slide Sentinel?
Slide Sentinel is a fully automated landslide monitoring system using RTK. It regularly monitors landslide activity with high spatio-temporal resolution and centimetre level accuracy for long term deployments. Measuring this way aids in early warning information and limits the use of invasive and expensive drilling.
Slide Sentinel is made up of a base station and a network of rover units which are positioned over the active landslide terrain. The rovers will record and send data regarding their position back to base via the Iridium satellite network which is then automatically recorded in the Cloud for analysis of real-time movement. Positional readings are provided every two to three hours.
Where does the RockBLOCK+ come in?
The RockBLOCK+ device is used as the entry point into the Slide Sentinel system when it is deployed in remote locations. All positions collected by rovers on the network are sent to the central base station, then uploaded to a cloud infrastructure for real time rover monitoring using the Rockblock+.
Slide Sentinel Developer and Project Lead, Kamron Kent Ebrahimi said: “The Rockblock+ has proved useful for sending data to the rovers on our system. Users can uniquely address and send rover configuration data via the Rockblock+. This data is eventually dispatched to the proper rover and can dynamically change the behaviour of the device, i.e. we can tell the rover to wake more or less frequently or make the rover unit's accelerometer more sensitive to movement events.”
Rock Seven Director Nick Farrell said: “This is yet another amazing use of our IoT devices, and shows the flexibility of the product and the Iridium network as a whole. Every day we see remote projects being enabled with our equipment, allowing scientists to go further and do more than ever before.”
Project developments
Due to the ongoing success of the project, Slide Sentinel has seen further development to support additional receivers and communication links. Work continues and all involved are dedicated to its continued success.
Regarding why he got involved with the project, Ebrahimi said: “I got involved in the project about a year and a half ago. I think being a lead developer on a highly technical project, as well as maintaining close contact with a client to engineer the proper system has been one of the most formative experiences of my undergraduate career.
“In addition to this I am attracted to the breadth of this project. Designing something of this scale requires learning best engineering practices for embedded systems, networking protocols, and configuring/deploying cloud infrastructure for handling data.”
What’s in store for the future? The team are hoping for a larger number of rovers to be serviced by one base as well as the use of a client web app instead of a Google spreadsheet. Watch this space! 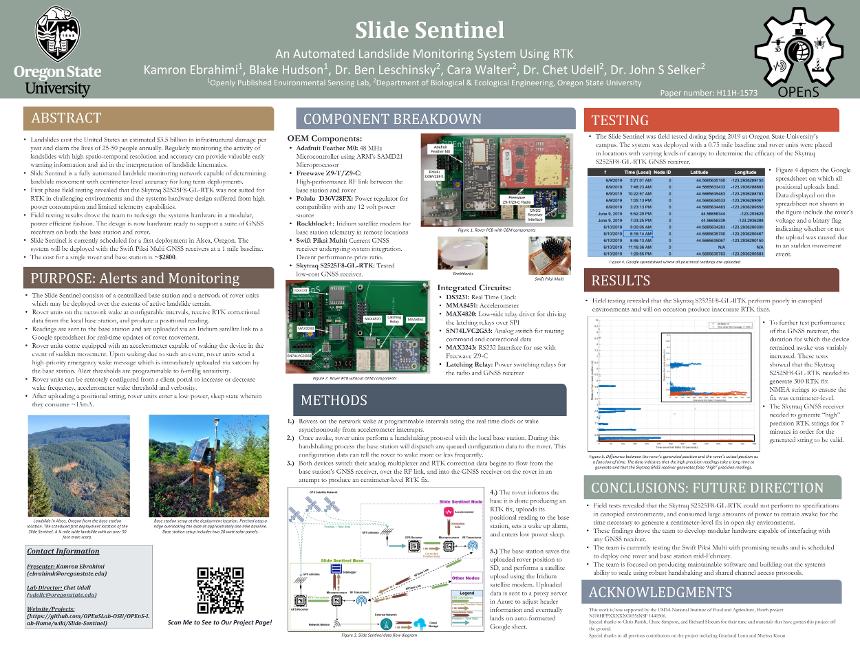